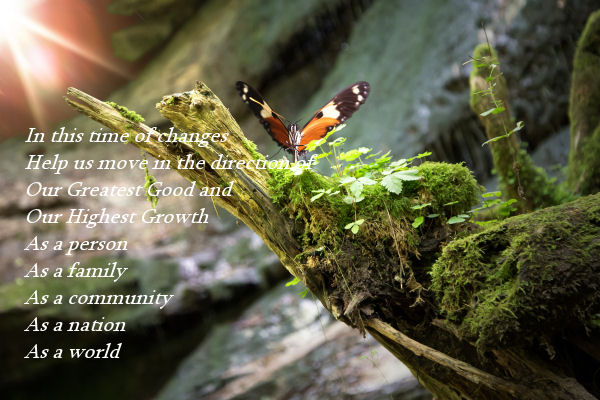 I am pagan. Specifically a Solitary Ecletic Neo-Pagan Witch and if you need that spelled out for you, you can find it here. I have no ill-will towards any living being. I believe deeply in The Law of Three, however you wish to call it. If everyone who claims to believe in that simple law which is part of almost every belief system in the world one way or another, and took the time to think before they act this would be a different world.

For most of my lifetime there have been people sounding the alarm about the growth in human population, and about the abuse of the Earth and her plants, her resources, her children. However, because that would cause them to have to think, or to sacrifice material goods or cash or a lifestyle they desire, the vast majority of human beings have chosen to ignore this advice, which is based on well grounded scientific facts (as well as Native beliefs). Some humans do make occasional small token efforts to live with the earth in harmony, but they are few and far between and often the efforts are far less than equal to their consumption of resources.

In our defense, modern life deluges us with information and advertising to create desires based on what will make the most money for people who already have more money than they could spend in a dozen life times. Most of us live our life at a pace that does not allow time for quiet reflection or deep thinking.

Our Lady loves us. We are her children just as much as the tigers or elephants or mosquitos are all her children. However, the human race has become that one unruly child who considers their own desires and needs to be more important than those of our brothers and sisters, let alone stop to consider our parents. Babies come into the world focused solely on their own needs for survivals sake. Children have to be taught empathy.

Perhaps because in the Western world we have decided that elders are worthless parasites, rather than repositories of wisdom and knowledge, we have lost that link that teaches children as they grow to also grow their circle of empathy from themselves, to their family, to their community, and to the world. To include plants and animals and the earth herself in that circle.

The Lady provides enough for all. No living being need go hungry, thirsty, or without shelter. But because of the fear and the resulting greed of a few who mistakenly believe that with enough money they will find safety and security there is a distribution problem. There are people vying over who has the biggest yacht while others are desperately hoping they get to eat today. This creates a situation where those who have much can dangle cash in front of those who have little and get them to act against their own interest and in a way that only enriches those who already have more than they need.

Human beings with their intelligence and technology have the ability to dominate nature. Human beings who are impoverished have the need to use up all of their available resources in an effort to survive. This leads to the burning of forests, and the steady push out into the few truly wild places left on Earth. The need to eat forces the poorest human beings to forage in the wild places and to come into contact with animals that carry diseases that have never met humankind before.

Hundreds of years ago, European people created an overcrowded human grouping that lived in close contact with their domesticated animals. Because of that they were exposed to diseases carried by those animals and in time developed immunities. When they made contact with the First People of the Americas – who lived in harmony with their surroundings and kept few if any domestic animals – those diseases found humans with no immunity.

The effects were devastating.

Through scientific research the COVID-19 pandemic has been traced to a single wildlife market in China. It resided most likely in an animal that was in the market to be sold for food. There is no evidence that the virus is passed by eating, so probably the animal was simply live, in a cage, sneezing on hundreds of people as they walked by. (The study information is linked here)

Our medical establishment over the last few decades has followed protocols that destroy the human immune system in the name of curing certain prevalent diseases such as auto-immune disease and cancer. Other treatments severely impair that same system, such as dialysis. Many elements of our current lifestyle also impair or damage our immune systems. I believe that there are other, more natural treatments and lifestyle changes we could make that would prevent or treat disease by working with our natural body defenses rather than by destroying them. But that’s an article for another day. This is where we are now. This situation creates a pool of human beings with little or no immune defenses for a new virus. Kind of like the First People, in a way.

We have overpopulated, outgrown our territories, invaded wild spaces, stripped the Earth of her resources and damaged her ability to provide for all of us. She has struggled to carry on for decades, maybe centuries, as we infected her like a plague. This is not the first epidemic or pandemic that our own actions have brought upon us. It is the most severe, and it’s the first to really impact the Western world – so we’re acting like this is something novel and amazing.

This is the Lady, in desperation, asking us to learn some self control. To slow down. To think about what we are doing. In fact, the only way to protect yourself and your family and your community is to be mindful of your actions. To think about it before you buy the last loaf of bread on the shelf. To think about it before you get in the car and drive, or hop on an airplane, or cruise ship that is fueled with the earths resources and returns only pollution to her. To be mindful of where you have been and who and what you have been in contact with and to clean your hands, your clothes, and your surroundings.

There is a new software to search movies that has literally billions of movies in their databases. Modern life and a certain level of wealth provides us with ample distractions. It’s really built that way so that we don’t ever stop and think about what we are doing to the Earth.

But at some point in time, you will have to stop and face yourself. You may find you have time to think. To use the marvelous human gift of reason and intelligence and the wisdom of the ages, the ability to read – and write – to share thoughts with those who lived hundreds of years ago or today. To use our unique human abilities to learn from the past, even the past of those you never met, to gain knowledge from those who know more about a certain subject – like epidemiology and microbiology – and natural healing, diet, creating good health and caring for ourselves. To stop and think about our actions and their effect on the Earth.

Or we can let the media drive us like the First Nations people drove panicked buffalo over cliffs to die.

Are you a frightened prey animal? Or a reasoning, intelligent human being? Your choice affects you, and thousands more. The time has come for us to slow down. To be mindful.

I know, it hurts.

The Lady never wanted to hurt us. She has tried to cope for decades. But we insisted on pushing further and further, to having every last resource for human beings only. She isn’t so much fighting back, as having a nice shower to get the fleas off. Any bird outdoors having a dust bath is doing the same.

You would know that, if you stopped and took time to watch birds outdoors and to think.